Will Keylor Navas ever convince Real Madrid to give up on David de Gea? 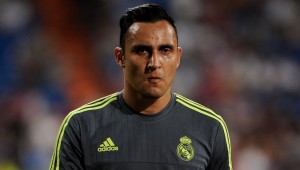 Real Madrid shot stopper has been in sublime form this season and has went from being unwanted to becoming most wanted in just a few months.

Keylor Navas never wanted to leave Real Madrid, but was told late on the transfer deadline day to pack his bags and prepare for a move to Manchester. He was supposed to make way for David de Gea whose shirt was waiting for the Costa Rican back in England.

However, sitting in the departures lounge at Barajas Airport on 31st August, Keylor received a phone call telling him to get back home.

In the end, the upsetting turn of events has had Costa Rica goalkeeper crying upon the realization he would remain in Madrid after all. Real Madrid keeper admitted to bursting into tears after an emotional roller-coaster which taught him an important lesson.

However, that very moment would turn out to be crucial in the career of the 28-year-old goalkeeper.

Navas confessed it was upon that instant that he decided to take the matters in his own hands. His head held up high, Costa Rica goalkeeper got back in Real Madrid training, working harder than ever before.

Renowned for his fascinating training routine he adopted while at Levante, Keylor Navas has been focusing on improving both traditional goalkeeping skills – one-on-ones, power, speed, agility, areal commanding – and concentration, on-ball ability and other aspects of the modern keeper’s requirements. The unorthodox training drills have been putting an emphasis on his stability, quality and general reliability and have made him the stronghold of Real’s backline.

Nine clean sheets in 12 matches for Real Madrid this term are there to prove it and Navas has finally started receiving the credit he fully deserves.

Rafa Benitez has put his faith into the Costa Rican gloves, and Keylor Navas has repaid the Spanish manager for his support and confidence with his fantastic performances.

Navas denied Antoine Griezmann from the penalty in the Madrid derby to earn his team a vital point, but his most impressive performance came in the 3-1 win over Celta Vigo last time out, which was surely the pinnacle of his fine form early in the season.

Goals from Cristiano Ronaldo, Danilo and Marcelo have put Real Madrid three up, but it was Keylor Navas who proved to be the man of the match. A string of several inspiring saves from Keylor Navas have even seen the opponents congratulate Real Madrid keeper on his fine display.

“We have to congratulate Keylor for saving three shots. I have no idea how he did it”, Celta striker Nolito said after the game at Balaidos.

The Costa Rica goalkeeper has become the hero of Real Madrid faithful.

Having conceded only three goals so far, Navas played an important role in his team’s unbeaten stretch of 12 games this entire season. One should bear in mind that Keylor Navas is the goalkeeper who receives more shots on target of all goalkeeper from Europe’s top clubs.

The total of 27 saves, four outstanding ones against the aforementioned Celta Vigo, have made him the fans’ favourite. Real Madrid supporters, Keylor’s teammates, but also the Spanish media are all doing their best in making up for their lack of support for the Costa Rican during summer.

Keylor is loved by all and is once again enjoying his life in Madrid.

His fantastic record aside, Navas has by now learnt what it really meant to be a member of the club such as Real Madrid. The globally recognized brand is more than a football club. Corporate business demands dictate the transfer dealings and Keylor’s fantastic sporting spirit and influence will come to nothing when he gets to be assessed through his marketing value.

This is where he will never be able to come close to David de Gea.

The Spanish superstar fits the business plan of Los Blancos hierarchy who will without a doubt look to bring the United shot stopper to Santiago Bernabeu as early as next summer.

Don’t let the public displays of support towards Keylor Navas and Davd de Gea from their respective clubs fool you, the goalkeeping saga has this summer transcended the footballing aspects. It has become the tug of war for general supremacy between the two Europe’s greatest.

Even though De Gea signed a new contract at Manchester United, and despite the fact that Keylor Navas will be offered an improved contract by La Liga giants, the Spanish international is still seen as the legitimate heir to Iker Casillas’ throne.