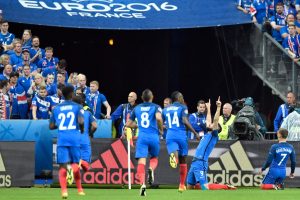 Tonight, at Stade Velodrome in Marseille, two of the European powerhouse will face each other. Portugal have already booked their place in their Euro finals after beating Wales 2-0 last night. Who will meet them in the finals? Ahead of the titanic clash, let’s take a look at how France can set up tactically against Germany.

France really struggled to play as a unit in their group stage games. In Didier Deschamps’ favourite 4-3-3 system France were lacking the balance and there was hardly any cohesion among the attacking players. Olivier Giroud started as a lone striker while Antoine Griezmann and Dimitri Payet floated around him from the wings. The understanding among the front three was clearly lacking while Paul Pogba failed to influnce the game from the middle of the park.

Deschamps was struggling to find the right balance for his side. Griezmann and Pogba (both the players have had enjoyed great 2015/16 domestic seasons with their respective clubs) are his two best weapons and both were failing badly. In fact, he dropped both of them against Albania, but it hardly made any difference. It was Payet whose individual brilliance took France all the way to the round of 16.

Then everything changed all of a sudden against Ireland. France were trailing by 1-0. They were hanging on desperately to get back into the match, but a sense of frustration clearly felt among as France hardly could muster a proper attacking move. It was then Deschamps took off N’Golo Kante. It was an obvious decision. A more attacking minded player was needed on the pitch, plus Kante anyway would have missed the next match through suspension.

Deschamps changed his system to 4-3-3. Pogba took the anchoring role in midfield, Payet moved to the left side on a free role that allowed him to move centrally time to time, and Griezmann played off Giroud. Within few minutes, France went 2-1 up, with Griezmann scoring both the goals. Giroud can be a very good target man, who loves the knock the ball down for a supporting partner, and Griezmann took advantage of that. A lesson learnt – you should always put your best players in the right position.

The same thing happened with Iceland. In front of a ruthless attacking unit, and a blitzkrieg of a start, Iceland had no idea how to counter it. Within 45 mins, it was 4-0. Game over. Griezmann was at the heart of every move, and everytime when he and Payet rushed on to the final third, the defence panicked.

The team is now bubbling with confidence. However, Deschamps need to take two key decisions against Germany. First, will he bring back Kante in the midfield? Germany are the world champions, a strong side with a dynamic midfield set up. Will he opt for an extra defensive midfielder to stop Toni Kroos from dominating the game? But to do that, he will need to revert to 4-3-3, and may have to sacrifice the balance of the side and the winning combination.

Another important decision for the French boss is who should play alongside Laurent Koscielny at the heart of defence? Adil Rami will return from suspension. He has the required experience to handle the pressure of a semi final clash. But, Deschamps will be more than happy to see Samuel Umitit’s extremely composed performance in his debut match against Iceland. Based on that performance alone, Umitit deserves another chance, but Deschamps may have other ideas.

The match promises to be a pulsating cracker. France must approach the game with an attacking mindset and not by being bogged down under pressure, like what Brazil did against Germany in the 2014 World Cup. We all know the result, don’t we?