Is one Europe’s hottest stars heading to the Premier League? 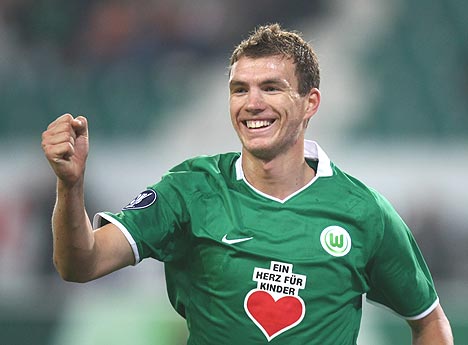 He has become a star in the Bundesliga with Wolfsburg, despite hailing from Bosnia-Herzegovina and could soon be heading to the Premier League. Edin Dzeko is now one of the most wanted players in Europe.

Dzeko scored 26 goals in 32 appearances in the German top flight. Dzeko and Grafite became the most prolific strike partnership in Bundesliga history.

His career started at FK Zeljeznicar in his homeland. He started off as a midfielder and scored just once in 40 games for his first club. It was only when he moved to Czech side Fk Teplice that his eye for goal was realised.

He finished as top scorer in the Czech top flight with 16 goals and attracted the attention of then Wolfsburg boss Felix Magath. He joined Wolfsburg for a fee in the region of £4million and helped the German side to fifth place in the Bundesliga. The next season the Wolves clinched their first ever title.

Dzeko has an impressive record at international level with Bosnia-Herzegovina. His scoring record of 14 goals in 23 appearances for his country is a superb ratio. In World Cup qualifying he finished as the second highest goal scorer and his country just missed out on this year’s World Cup finals.

His form and quality has brought him to the attention of the likes of AC Milan, Chelsea and Arsenal. The latest Premier League name to be linked with the 24 year-old is Tottenham Hotspur. They would have to secure a Champions League place for that to be even a remote possibly. Although it looks unlikely that Spurs will beat the European giants to Dzeko signature.

AC made a move for the striker last summer but was quoted a price they couldn’t afford. There has now been murmuring’s from his present club that the striker will be available for £25million. Even though it’s a hefty price tag for one player, he is some player.

Dzeko has already admitted that a move to AC would appeal to him and that Milan would be his preferred destination if he did leave Wolfsburg. However it remains to be seen if the Rossoneri can afford to sign the striker this summer. Mega-rich Manchester City have emerged as one of the favourites to clinch his signing despite the fact they already have international strikers Carlos Tevez and Emmanuel Adebayor. Dzeko would be seen as an extra attacking option.

Chelsea are also looking to strengthen their squad this summer and owner Roman Abramovich is set to give Carlo Ancelotti a big war chest. Dzeko would be an ideal player to freshen up Chelsea’s attacking play. Would he complement Didier Drogba in Chelsea’s forward line?

He could also prove an ideal signing for Arsenal, who are currently lacking strikers. However his signing would go against Arsene Wenger’s previous frugal transfer dealings. If Wenger could somehow find the money he could make a crucial difference next season.

Dzeko is regarded as one of the most complete centre-forwards in world football. He has everything a modern striker needs. He is also a guarantee of goals for any side. Strikers like Dzeko are few and far between in modern football and his signing would prove a major coup, whoever ends up signing him.