The curse of the ex-player 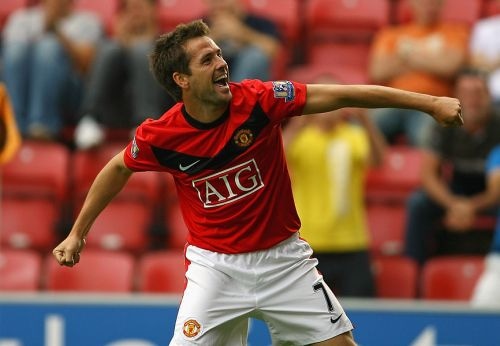 There is always a horrible feeling when an ex-star comes to play back at your home ground. The ex-hero who was once worshipped and is now almost hated. No matter how much of a hero he used to be.

Take today when Manchester United take on Liverpool at Anfield. Michael Owen was once a worshipped Kop idol. If he plays he will receive a stream of abuse from the fans who once loved him because he choose to join the Reds bitter rivals. It seems it doesn’t matter how much a player is loved if he joins a rival that’s where the love stops.

It is almost inevitable that Owen will come back to haunt the Reds tomorrow, if he gets the chance of course. The little former Kop idol still seems thrive on the big game atmosphere and will be really up for this game.

I always remembering seeing pictures of Dennis Law scoring for Manchester City against Manchester United and the Scot not celebrating. The reason being basically he had just scored the goal that relegated his old club. He was a true United legend. I wonder if United fans have forgiven him yet?

Michael Owen won’t score the goal that relegates his old team tomorrow but he could score the goal that ends their chances of winning the league title. Some Liverpool fans I know haven’t even forgiven Owen for joining United yet, never mind if he scored a winner against them as well.

From hero to villain

A player doesn’t just get abuse if he joins a rival. My team Everton have the ultimate hero to villain story, Wayne Rooney. Some Everton fans give the England star vicious abuse every time we play Manchester United. This abuse comes from the fact that one of the best players of his generation left before he hit his peak.

He has came back to haunt us a few times but his emotions tend to get the better of him when he visits Goodison Park, due to the fact that he was a lifelong Everton fan. He too is a big game player just like Owen but thankfully for the Blues he is usually too worked up to have a decent game against us.

Manchester City striker Emmanuel Adebayor came back to haunt Arsenal in their game earlier this season. The striker of course nearly incited a riot by running the length of the pitch to celebrate in front of the away fans. The incident has been well documented. The striker put the celebration down to the Arsenal fans abuse getting to him. However there was no excuse for the idiotic celebration.

On the other hand though there was Richard Dunne, who when scoring against his own side City refused to celebrate. The dignity and respect he shown to his old club was admirable. Dignity and respect despite the way he left the club. He felt he was almost thrown out of the club to make way for new signing Joleon Lescott.

Whether Michael Owen scores the winner or not against Liverpool tomorrow lunchtime the little striker will now always divide opinion amongst Liverpool fans. Some will still consider him a hero whether he is a success at Old Trafford or not and some will see him as a traitor.

Whatever happens Owen will always remain professional and dignified. I can’t see him doing a Adebayor and celebrating like a man possessed. I may be wrong but knowing Owen’s personality and character he is unlikely to want to cause trouble by doing something silly.

who gives a shit. Its a sport. The end.

reallyQUESTIONMARK, please don’t comment if you haven’t got anything sensible to say.

I second that. With all due respect, Question Mark, that was not the right thing to say. . . Only just decided to read this article, as I have been busy here in my area and also mainly paid attention to David’s Are You a Soccerholic? Just so you know, I have known about Dennis Law’s goal for years. I never felt any hatred. We may have been relegated, but the fact he didnt ever celebrate the goal is why I dont feel betrayed. So yes, David, at least one Red Devil fan has forgiven Law. And you cant blame… Read more »