Charlie Adam worth more than £4.5 million to Blackpool 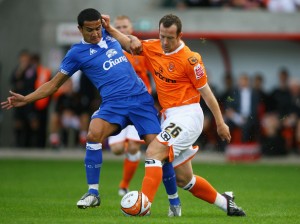 Liverpool, Aston Villa and Birmingham are all now chasing the signature of Blackpool captain Charlie Adam.

Liverpool are believed to have lodged a £4.5 million bid for the Scottish midfielder, which has been rejected. However he seems keen on a move to Anfield.

Adam has a major influence on the way Blackpool play their football. Their whole game plan is almost set to suit Adam in midfield.

He seems to have a hand in every attack Blackpool have. He also has a decent scoring record, especially season when the club won promotion.

He scored 16 goals last season as Blackpool defied all the odds and won promotion to the Premier League via the Championship play-offs.

Charlie Adam cost Blackpool just £500,000 from SPL giants Rangers. In his latter days at Ibrox he struggled for first team football and was temporarily loaned out to the Seasider’s before he made the switch permanent.

£500,000 doesn’t seem like a lot of money in Premier League terms but it was a club record fee for the Tangerines and at the time the move was seen as a gamble by boss Ian Holloway. Ollie knew exactly what he was doing though.

Adam promised to pay back Blackpool for paying out a record fee and boy has he done that by inspiring the club to promotion to the English top flight. Holloway has made some brilliant signings but Charlie Adam must be by far the best. Bargains like him don’t come along every summer.

Adam’s career was slightly stagnating in Glasgow with Rangers and he needed a change. The move to Blackpool helped him gain regular first team action and also made him into the central figure of the Blackpool team.

Charlie Adam has done well for Blackpool but Adam also owes a lot to Blackpool and Ian Holloway. Ollie definitely doesn’t want to lose his inspirational captain at this point of the season and hopes to keep him beyond this transfer window.

I believe that Charlie Adam should stay with Blackpool until the end of the season and then leave, if that’s what he really wants. This gives Blackpool a chance to try and find a replacement for the Scottish international.

If he stays it also gives Blackpool a better chance of avoiding getting dragged into the relegation battle. The atmosphere within the Blackpool camp is superb and the sale of their best player could harm that atmosphere and hit morale within the dressing room.

If the worse does happen and Blackpool are forced to sell Charlie Adam in the transfer window they need to get as much money as they can for the playmaker. Blackpool are probably the poorest club in the Premier League but the reported offer of £4.5million is far too low.

With Blackpool being a small club, bigger clubs seem to think they can just come and take their best players and for small fee’s. Blackpool can’t allow it and need to try and hold onto their better players.

Unfortunately player’s heads get turned by bigger clubs showing interest and sometimes ask to leave. The smaller club is then in a difficult position because they have an unhappy player if they decide not to sell. The situation usually results in the smaller club selling their star assets.

For now Charlie Adam is still a Blackpool player and he needs to concentrate on keeping Blackpool in the Premier League for next season. He can then decide in the summer where his future lies. He owes that much to the Tangerines.

Will Charlie Adam leave in the January transfer window?

own coyle for manager of the season